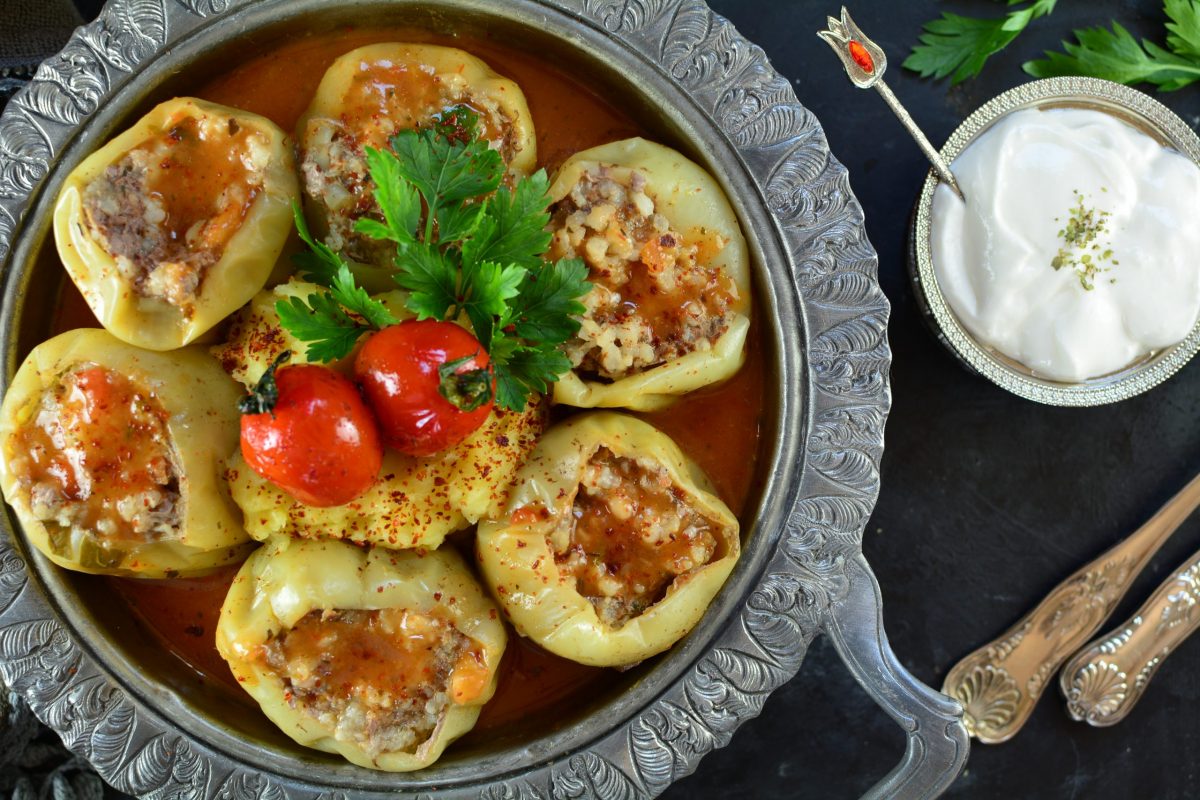 You are reading this post because you probably wanted to learn more about Bosnian cuisine and you googled something like what Bosnians eat, or what to eat in Bosnia. Perhaps you typed Bosnia food near me or Bosnian pita or Bosnian burek, or Bosnian cevapi?

Am I right? Or you were just looking for a good recommendation on where to eat good, authentic, hearty Bosnian food in one of the best restaurants in Bosnia?

Anyhow, we are glad that you are here, and let me tell you some things you probably did not know about Bosnian Food.

Bosnian food is characterized by a mix of Mediterranean and Central European dishes heavily influenced by Turkish cuisine. Bosnian food is a unique cuisine that has been shaped by the many different cultures that have come together in this small country. From Turkish to Italian, and Serbian to Hungarian, there are all sorts of flavors and dishes to be enjoyed in Bosnia. The most common bosnian foods are ćevapi (a grilled dish made of minced meat), pljeskavica (a hamburger-like dish), burek (a filled pastry), Japrak (collard green rolls), Dolma (stuffed peppers), and many other delicious meals made with traditional Bosnian food recipes.

This dish is made of minced meat and is a popular grilled Bosnian food in Bosnia. Ćevapi can be made with beef and lamb and is often served with onions, ajvar (a roasted red pepper sauce), and bread. The dish is typically made with two types of minced meat, hand-mixed and formed into a funnel before being grilled. Traditionally it’s served on bread or Turkish lepina. This bosnian food known as “čevap” has origins in the Balkans during Ottoman rule, and represents a type of regional specialty similar to other kebabs like kofte. They are usually served with five or ten pieces on one plate (in groups), along side chopped onions & milk cream called ‘kajmak’ which acts both as dips for bites into this delicious meal. Each bigger town or area in Bosnia and Herzegovina has its own style of ćevapi made according to its own Bosnian Cevapi recipe.

Pljeskavica is a dish that is made with a mixture of beef and lamb. It is one of the national dishes of Bosnia Herzegovina, and it is popular Bosnian food in many Balkan and Yugoslavian countries as Balkan Street Food. People usually eat it with onions, kajmak (milk cream), ajvar (relish), and either on plate with side dishes or with lepina (flatbread, like a hamburger).

Punjena pljeskavica or stuffed pljeskavica is a variation of the pljeskavica dish that is stuffed with cheese or kajmak. It is also a popular dish in Bosnia Herzegovina, and it is usually eaten with the same sauces and sides as the pljeskavica.

Japrak or Japrak sarma as some people call it and others frown upon it is a dish that is made with collard leaves that are stuffed with rice, meat, and spices. It is a popular dish in the Balkans, and it is Bosnian food often served as an appetizer or side dish. The dish can be made with either beef or lamb, and the rice is often seasoned with onions, garlic, salt, and pepper.

Another popular Bosnian food is dolma, which is made from peppers stuffed with minced beef and mild spices. It’s generally served as an appetizer or side dish, but it may also be eaten alone as a main course. It is easy to learn how to cook Dolma and it’s a very straightforward recipe that only requires four dolma ingredients: ground beef, rice, onions, and salt.

Burek is a type of pastry that is filled with either meat or cheese and is often considered as Bosnian Street Food. It is popular in the Balkans and in countries that were formerly part of Yugoslavia. There are many different variations of burek, but all of them are made with phyllo dough. The dough is rolled out into thin sheets and then filled with either meat or cheese. The sheets are then stacked on top of each other and baked until the pastry is crispy and golden brown. Burek can be served hot or cold, and it can be eaten as a snack or a main course. If you want to learn how to make burek according to the Bosnian Burek recipe and impress your friends and family back home, you can always book Bosnian cooking lessons while in Mostar. If you do get around to book a lesson, you will receive a recipe from a Bosnian cookbook and learn how to make Bosnian pita or Bosanski Burek how we like to call it. You will also learn how to make Burek dough which is essential to know if you want to make proper Bosnian Burek.  You will also learn how to make Burek with cheese or  Sirnica.

Sarma is a dish that is made with pickled cabbage leaves that are stuffed with meat and rice. It is one of the popular Balkan dishes in the countries that were formerly part of Yugoslavia. There are many different variations of sarma, made with different Sarma recipe but all of them are made with minced beef or lamb. The meat is mixed with rice, onions, and spices and then rolled up in pickled cabbage leaves. The rolls are then boiled until the cabbage leaves are soft and the meat is cooked through. Bosnian Sarma is served warm, and it can be eaten as a snack or a main course. This is usually a meal consumed in the cold winter months and can be served with a side of mashed potatoes.

Kalja is dish made with Cabbage, veal, potatoes, and carrots. It is a popular dish in the Balkans, and it is often served as an appetizer or side dish. The dish can be made with either beef or lamb, and the vegetables are boiled until they are soft. The meat is then added to the vegetables and cooked until it is tender. Kalja is served to steaming hot, and it can be eaten as a side or a main course. Kalja is a hearty dish that will fill you up and keep you warm on a cold winter night. It’s perfect for those days when you don’t feel like cooking anything complicated and just want something simple and satisfying.

Meat and vegetables cooked under a metal, ceramic, or earthenware lid is a traditional way of cooking lamb, veal, or goat. The heat from the coals and ashes cooks the meat. The meat is usually marinated with onions, garlic, and spices before it is cooked. This is a popular dish in the Balkans and in countries that were formerly part of Yugoslavia. There are many different variations of meso ispod sača, but all of them are made with lamb, beef, or goat. The meat is cooked until it is tender and then served with the vegetables.

Another popular Bosnian dish is spit roast lamb. Lamb is rubbed with salt, before it is cooked on a spit over an open fire. The lamb is cooked until it is tender and then served with the oven-baked potatoes. Spit roast lamb is a festive dish that is often served at weddings or other special occasions. It is a dish that is sure to impress your guests and leave them wanting more.

Bosnian pot is a dish that is made with potatoes, carrots, and beef or lamb. It is a popular dish in the Balkans and in countries that were formerly part of Yugoslavia. There are many different variations of bosanski lonac, but all of them are made with either beef or lamb. The meat is cooked until it is tender and then added to the vegetables. Bosanski lonac is served steaming hot, and it can be eaten as a side or a main course. This is another hearty dish that will fill you up and keep you warm on a cold winter night.

Sudžuk – (Sujuk) – spicy beef sausage is a popular dish in the Balkans and in countries that were formerly part of Yugoslavia. The sausage is made with beef, garlic, salt, pepper, and spices. It is then smoked and dried until it is hard and chewy. Sudžuk can be eaten as a snack or side or as a part of a meze platter. It is a popular dish at breakfast time, but it can also be served at lunch or dinner. Sudžuk is a flavorful sausage that is sure to please your taste buds.

Prsut is a type of dry-cured meat that is popular in the Balkans and in countries that were formerly part of Yugoslavia. Prsut is made with beef, salt, garlic, and spices. It is then air-dried for several months. Prsut can be eaten as a snack or side or as a part of a meze platter. It is similar to Italian Bresaola. Prsut is salty and delicious and will leave you wanting more. Goes well with beer.

The traditional Bosnian cuisine is full of delicious, flavorful dishes. Some of the most popular include japrak, dolma, cevapi, pljeskavica, burek, meso ispod saca and Spit roast lamb. All of these dishes are hearty and filling, perfect for satisfying your hunger. So if you’re looking for some new and interesting food to try, be sure to give Bosnian cuisine a go at Food House Mostar ! You won’t be disappointed. 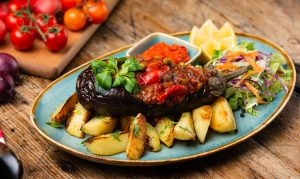 10 best restaurants in Mostar, Bosnia and Herzegovina and everything about Mostar culinary scene and where to eat in Mostar 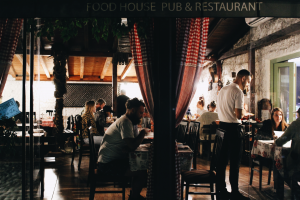 A Guide to Different Types of Eating experiences in Mostar Restaurants 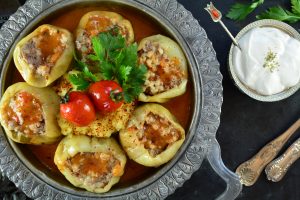 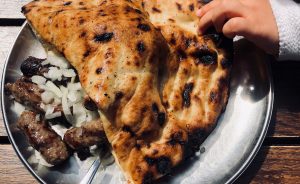 Bosnian Cevapi – the National Dish of Bosnia and Herzegovina